Quaff some beer and edify yourself at the bonus Fort George Thursday Talk about the Beeswax Shipwreck, go see the play Birds of a Feather, and enjoy the hottest (so far!) Astoria Sunday Market of the year!

[L]earn about the famed Beeswax Shipwreck – a 300-year-old shipwreck discovered in sea caves just north of Manzanita. Scott Williams and Dr. James Delgado will take us through how archaeologists determined the wrecked ship was the Santo Cristo de Burgos, how the shipwreck was discovered, what we will learn from it, and more. Doors to the Lovell Showroom open at 6pm with food and drinks available via the Taproom window. Guest taps featuring Buoy Beer available in all areas across the block!

Doors open at 6pm, and food & beverages are available. This event is all ages and there is no cover!

Birds of a Feather 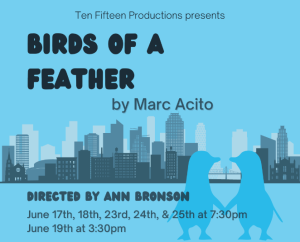 Birds of a Feather, a play by Marc Acito and directed by Ann Bronson, is the latest production of the Ten Fifteen Theater (1015 Commercial), continues this week with shows at 7:30pm on Thursday, Friday, and Saturday, June 23, 24, 25.

Birds of a Feather recounts the story of Roy and Silo, the two Central Park Zoo chinstrap penguins who partnered, adopted an egg, hatched and raised a chick together. Roy and Silo are no strangers to the spotlight. In 2005, they were the subject of a widely contested children’s book, And Tango Makes Three, by Peter Parnell and Justin Richardson. The book, temporarily pulled from school bookshelves in Loudoun County, became one of the most banned books in the US.

Tickets $20 and are available online or at the door. Makes sure to check the theater website before the show for the latest COVID policies.